Beijing is accusing the United States of entering China’s territorial waters without permission after a U.S. Navy warship entered the South China Sea on Thursday. It is the same warship that passed through the Taiwan Strait on Tuesday. (se video)

USS Ronald Reagan (CVN-76) and its escorts departed Naval Fleet Support Activity Yokosuka, Japan, on Wednesday as part of Carrier Strike Group 5. The carrier left with guided-missile cruiser USS Shiloh (CG-67) and guided-missile destroyer USS Halsey (DDG-97), according to a statement from U.S. 7th Fleet.
........
“The Ronald Reagan Carrier Strike Group is excited to deploy and assume the watch during a time of unprecedented activity throughout the region,” Rear Adm. Will Pennington, CSG 5 commander, said in the statement.
“Alongside our regional allies and partners, we are ready to respond to any contingency in any location to demonstrate our shared commitment to regional stability and adherence to international norms.” 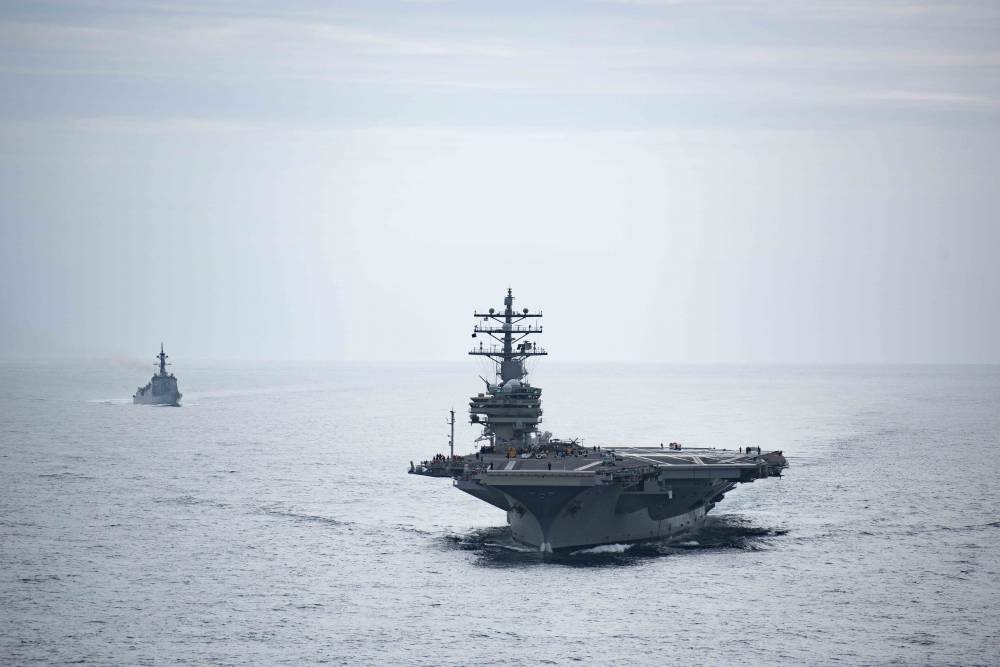 (CNN)Britain's Queen Elizabeth visited the country's new aircraft carrier on Saturday, giving the UK's biggest warship a royal sendoff before it leads a flotilla of British, US and Dutch ships to Asian waters on its maiden operational voyage.
...........
The 65,000-ton warship will carry eight British F-35B fighter jets and 10 US Marine Corps F-35s as well as 250 US Marines as part of a 1,700-strong crew.
It will lead the flotilla alongside two destroyers, two frigates, a submarine and two support ships on its journey of 26,000 nautical miles over 28 weeks. The group will be joined by a US Navy destroyer and a frigate from the Dutch navy.
The Defense Ministry said the flotilla will be the largest concentration of maritime and air power to be deployed from the UK in a generation.
The group will sail through the contested South China Sea, parts of which are claimed by China and Southeast Asian countries, on its way to the Philippine Sea. The ships will also stop in India and Singapore.
............
I'd rather be judged by 12 than carried by 6 .........

China's chilling warning: Australia will be the 'first hit' if the 'insignificant' nation meddles in Chinese conflicts - as Beijing boasts of ballistic missiles which can reach Down Under

Australia's military is 'weak,' 'insignificant' and will be the 'first hit' in any potential conflict over Taiwan, Chinese propagandists have warned.

The chilling message in the Communist Party mouthpiece, the Global Times, comes as Australian naval forces completed war game exercises with the US, France and Japan held between May 11 and 17 in the East China Sea.
...............

'The People's Liberation Army doesn't even need to make pointed responses to the joint drill since it's insignificant militarily,' the article said.

'Australia's military is too weak to be a worthy opponent of China, and if it dares to interfere in a military conflict for example in the Taiwan Straits, its forces will be among the first to be hit'.

'Australia must not think it can hide from China if it provokes'.

'Australia is within range of China's conventional warhead-equipped DF-26 intermediate-range ballistic missile.'
I'd rather be judged by 12 than carried by 6 .........

A Joint Statement issued by South Korean President Moon Jae-in and US President Joe Biden following their summit Friday included references to the Taiwan Strait and South China Sea, which arguably represent the geopolitical front lines of the US-China rivalry.
The references had also been included in a summit issued after a US-Japan summit last month. But while the South Korea-US statement saw the two sides agreeing on reining in China, it noticeably refrained from any direct attacks on Beijing.
The latest statement echoed the one from the US and Japan with its inclusion of a sentence about the two leaders “emphasiz[ing] the importance of preserving peace and stability in the Taiwan Strait.”
This was the first time the Taiwan Strait had ever been mentioned in a joint statement by the South Korean and US leaders. The reference in the US-Japan statement was the first in 52 years since 1969.

China's Ministry of Foreign Affairs on Monday warned the U.S. and South Korea not to interfere in China's Taiwan issue, after leaders of the two countries agreed last week to "work together to seek peace and stability across the Taiwan Straits."

"China is concerned about the relevant content of the U.S.-South Korea joint statement, and we believe that the development of U.S.-South Korea relations should be conducive to promoting regional peace and stability and development and prosperity, and should not harm the interests of third parties, including China," Zhao Lijian, a spokesperson for the ministry, told a regular news briefing in Beijing.

"We urge the countries concerned to be careful in their words on the Taiwan issue, and not to play with fire."
I'd rather be judged by 12 than carried by 6 .........

MANILA, Philippines—Defense Secretary Delfin Lorenzana welcomed the UK carrier strike group headed to the region on a mission to promote freedom of navigation in the South China Sea and highlight its deeper security role in the Pacific.
A port visit to Manila of the strike group’s component vessel was set, according to Arsenio Andolong, director and spokesperson of the Department of National Defense (DND). Earlier reports said the UK ships were expected to make several port visits during its seven-month voyage. 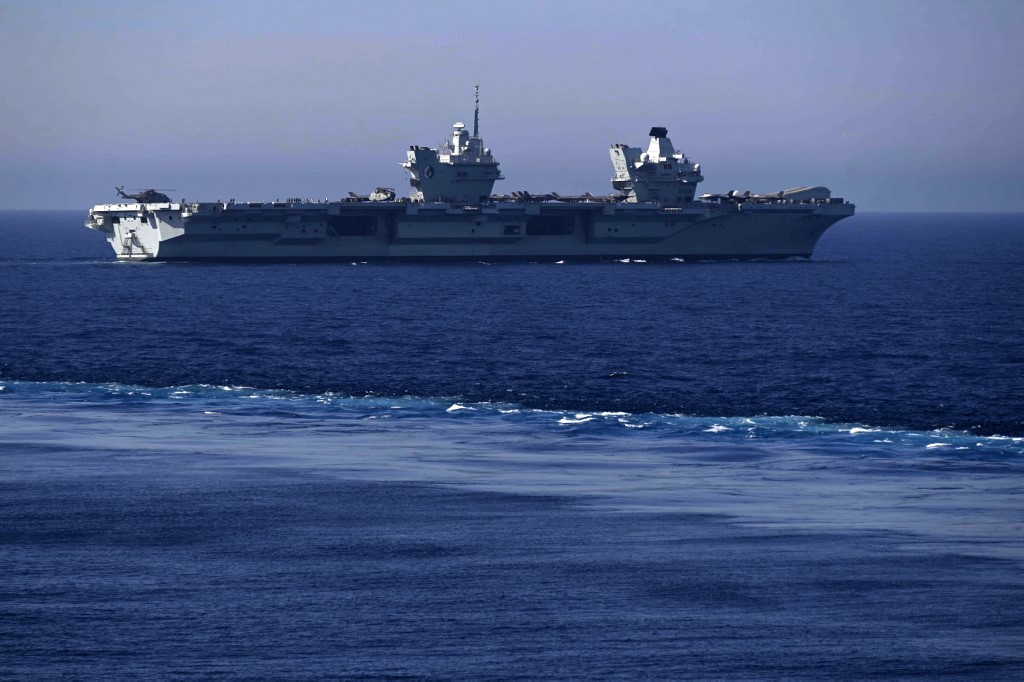 The 65,000-ton aircraft carrier with more than 30 aircraft plans to visit the Asian waterway for military drills with the U.S. Navy and Japanese Maritime Self Defense Forces, British media outlets say. The ships set sail in May for a world journey of seven months, the Royal Navy said on its website without specifying when it would reach the South China Sea. A Dutch frigate and an American destroyer have joined the group.
I'd rather be judged by 12 than carried by 6 .........

In a virtual meeting, the defense chiefs of the Philippines and Japan expressed “grave concern” over the recent Chinese activities in the South and East China Sea, according to the Philippines’ defense department.
Defense Secretary Delfin Lorenzana and Japanese Defense Minister Nobuo Kishi agreed on Friday, June 4, that all parties involved in the maritime security issues in the region should uphold the principles of the freedom of navigation, the defense department added.
..............
Meanwhile, Lorenzana and Kishi agreed to strengthen the defense cooperation between the two countries by increasing the activities between the two countries’ military, the department said.
Japan helps in the continuous modernization of the Armed Forces of the Philippines (AFP). According to Lorenzana, the TC-90 aircraft donated by Japan is helpful in the military’s reconnaissance missions. The Japanese defense minister also noted that the transfer of radar systems from Japan to the Philippines has been progressing seamlessly.
I'd rather be judged by 12 than carried by 6 .........

A bipartisan delegation of three United States senators landed in Taiwan on Sunday and announced that Washington would donate 750,000 coronavirus vaccine doses to its ally.

The high-profile delegation and gift comes as Taiwan accuses China of hampering its efforts to secure enough doses as part of Beijing's ongoing campaign to keep the island isolated.

Senators Tammy Duckworth, Christopher Coons and Dan Sullivan - two Democrats and a Republican - landed on Sunday morning at Taipei's Songshan Airport in a US military plane.
I'd rather be judged by 12 than carried by 6 .........

The US Now Prepping For WAR With China, Dispatching Air Force Across Pacific, Taiwan Faces Invasion. While Republicans have long said China is a bigger threat than Russia Democrats have long been opposed to the idea.

But now joe Biden is granting access to Russia to build a pipeline suggesting that China has become the bigger threat even in the minds of Democrats.

The Chinese military has released a flurry of pictures and videos showing battle-ready troops in training exercises as part of a new propaganda drive aimed at Taiwan.

Articles published by the information arm of the People's Liberation Army's (PLA) 80th Group Army carried stark warnings for "splittists" and a poster reading "prepare for war." The campaign material was widely shared on Wednesday by users on China's popular social media services Weibo and WeChat.
...............
I'd rather be judged by 12 than carried by 6 .........

Group of Seven leaders on Sunday scolded China over human rights in Xinjiang, called for Hong Kong to keep a high degree of autonomy and demanded a full and thorough investigation of the origins of the novel coronavirus in China.

After discussing how to come up with a unified position on China, leaders issued a highly critical final communiqué that delved into what are for China some of the most sensitive issues, including also Taiwan.

The re-emergence of China as a leading global power is considered to be one of the most significant geopolitical events of recent times, alongside the 1991 fall of the Soviet Union that ended the Cold War.
..............
I'd rather be judged by 12 than carried by 6 .........

“The best way to predict your future is to create it.” - Dan Miller.
Upp
Skriv svar
115 inlägg