Jennifer Zeng has posted an alarming new tweet, bringing attention to an even more alarming video that was uploaded to a Chinese military channel called Liu Jun Tao Lue which threatens full-scale nuclear war with Japan.

The video proposes that the CCP would punish Japan beyond description if the country was to use a single soldier, plane, or ship -- and that not only would it return fire, but it would start a "full-scale war against Japan". First, they would drop nuclear bombs, they would drop nuclear bombs continuously... until Japan declares "unconditional surrender for the second time".

The CCP wants to squeeze Japan until it bleeds out, as it would target their ability to endure a full-scale war. China knows that Japan can't afford a full-scale war, so it would be foolish for the country to send troops to the Taiwan Strait.
I'd rather be judged by 12 than carried by 6 .........

The original video rapidly gained over 2 million views but was later deleted. Prior to its deletion, netizens posted it on Western social media platforms such as YouTube and Twitter.

Human rights activist Jennifer Zeng (曾錚) added English subtitles to the video and uploaded it to her Twitter account on Tuesday (July 13). Zeng also managed to download a follow-up video before it too was deleted.

In the second video, the narrator focuses on the numerical superiority and fighting will of PLA forces compared to their Japanese opponents. The video also claims that after Japan is defeated, China will break up its four main islands into independent countries under the "supervision" of China and Russia, which will both establish military garrisons there.

The narrator adds that Okinawa will be broken off from Japan and either be managed by China or made into an independent country. The video concludes with a vow to punish Japan Prime Minister Yoshihide Suga, former Prime Minister Abe Shinzo, and Deputy Prime Minister Aso Taro and force the Liberal Democratic Party and Japanese right-wing parties and organizations to pay "heavy war reparations."
I'd rather be judged by 12 than carried by 6 .........

Even the US could not defeat China militarily in the West Pacific region now, so "what makes Japan believe it's able to challenge China with force?" he asked.

He warned that "Japan should understand that the US could run away if it loses, but Japan is too close to China, and there is nowhere it could run."

The paper accused activities of Chinese vessels last year near the islands of "a violation of international law."

In response, Zhao said the Diaoyu Islands and the affiliated islets are an inalienable part of Chinese territory and China's patrols in waters off the Diaoyu Islands are legitimate and lawful exercises of its inherent rights. "
I'd rather be judged by 12 than carried by 6 .........

BEIJING/TAIPEI, July 20 (Reuters) - China warned Lithuania on Tuesday not to "send the wrong signals to Taiwan independence forces" after the Chinese-claimed island said it would open a de facto embassy in the Baltic country, a move the United States strongly backed.

Beijing considers the democratically-governed island to be part of "one China", and it is the country's most sensitive territorial issue.

China's Taiwan Affairs Office said it opposed any country with which it maintains diplomatic ties having official relations with Taiwan.

"We urge Lithuania to abide by the one-China principle and not to send the wrong signals to Taiwan independence forces," it said in a statement.

Lithuania said earlier this year it plans to open its own representative office in Taiwan, a decision that also angered Beijing. The country announced last month it would donate 20,000 COVID-19 vaccine doses to Taiwan.
https://www.reuters.com/business/health ... 021-06-22/

Taiwan will set up its first office in Europe using the name “Taiwan,” drawing a rebuke from China and praise from the U.S. as the island democracy seeks to strengthen its diplomatic presence around the globe in the face of pressure from Beijing.

The government in Taipei will open its office in the Baltic nation of Lithuania, Taiwan’s Foreign Minister Joseph Wu said at a briefing on Tuesday. Taiwan’s other diplomatic outposts on the continent are under the name of “Taipei.”

“Lithuania has firmly believed in universal values such as democracy, freedom and human rights, and is a like-mined partner of Taiwan,” Wu said. “Taiwan and Lithuania are both at the strategic front line to safeguard democratic and free regimes.”
I'd rather be judged by 12 than carried by 6 .........

Britain is to base two Royal Navy ships permanently in the Far East to help form a bulwark against Chinese claims over Asian waters.

The announcement was made today by Defence Minister Ben Wallace during a visit to the Japanese capital, Tokyo.

It comes ahead of a planned visit to Japan in September by a Royal Naval strike group led by the new $5.9 billion (£3b) flagship aircraft carrier, HMS Queen Elizabeth.

"Following on from the strike group's inaugural deployment, the United Kingdom will permanently assign two ships in the region from later this year," said Wallace, speaking alongside his Japanese counterpart, Nobuo Kishi.
I'd rather be judged by 12 than carried by 6 .........

China is criticizing NBC Universal for not showing Taiwan and the South China Sea in a map of China the network displayed during the opening ceremony of the Olympics.

The Chinese consulate in New York posted on its Weibo social media page that NBC displayed an “incomplete map” and "hurt the dignity and emotions of the Chinese people,” Reuters reported.

"We urge NBC to recognise the serious nature of this problem and take measures to correct the error,” the post stated.

The Global Times newspaper, a state-run paper in China, also expressed its displeasure at the map.

First “hurt feelings” transgression of the Tokyo Olympics happened halfway through the opening ceremony, as NBC uses an “incomplete map” of China. pic.twitter.com/TBcSUIAeuE
................. 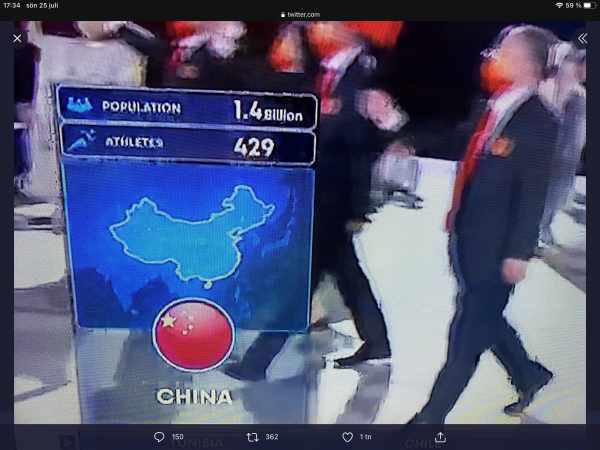 The South China Sea is a disputed territory that China claims as their own while the Biden administration said it supports a 2016 tribunal ruling that stated China had no claim on the area.

“It's incredibly important to defend Taiwan in every way possible,” Del Toro said during his confirmation hearing. “It takes a holistic view of our national commitment to Taiwan. We should be focused on providing Taiwan with as much self-defensive measures as humanly possible.

“And if confirmed to the Navy, I am going to be exclusively focused on the China threat and exclusively focused in moving our maritime strategy forward in order to protect Taiwan and all of our national security interests in the Indo-Pacific theater," he added.
I'd rather be judged by 12 than carried by 6 .........

The aircraft carrier and her escorts were recently in Singapore before entering the South China Sea.

China claims almost all of the 1.3 million-square-mile South China Sea as its sovereign territory, and it has denounced the presence of foreign warships there as the root of tensions in the region.
.......... 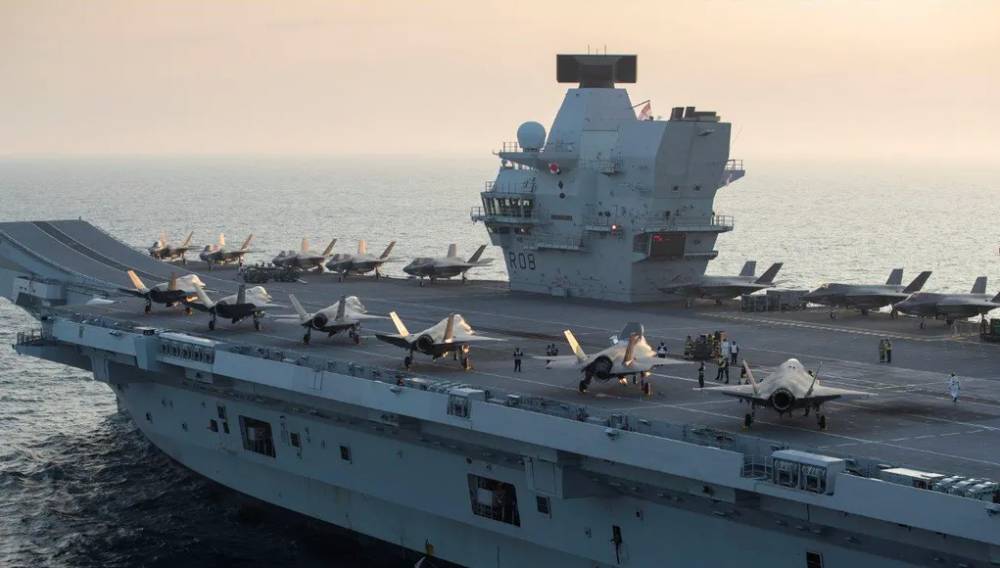 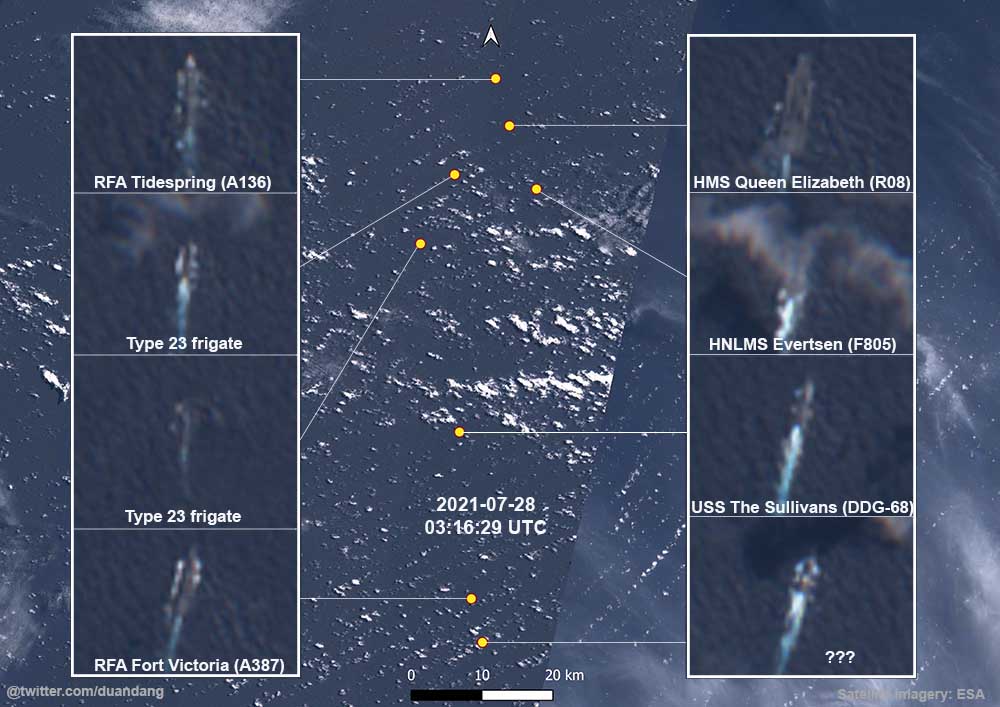 Satellite imagery has emerged that indicates that the U.K. Royal Navy aircraft carrier HMS Queen Elizabeth is underway in the South China Sea while the Chinese People’s Liberation Army Navy flattop Shandong is also in these waters, though the two ships look to be sailing on opposite sides of the disputed body of water, at least for now. The appearance of the British flagship in the South China Sea had been anticipated, but it still carries a significant message as the United Kingdom and its allies look to further challenge China’s expansive territorial claims in this region.

Using satellite imagery provided by the European Space Agency and NASA/U.S. Geological Survey, Twitter user @duandang appears to have located the two aircraft carriers in the South China Sea, separated by around 580 nautical miles of water. The Shandong looks to be underway just south of Hainan Island, where it is home-ported within a huge People’s Liberation Army Navy (PLAN) base. Meanwhile, the imagery indicates that HMS Queen Elizabeth is between the coast of Vietnam, to the east, and the island of Borneo to the west.
I'd rather be judged by 12 than carried by 6 .........

“The best way to predict your future is to create it.” - Dan Miller.
Upp
Skriv svar
140 inlägg